The Topkapı Palace which has been the center of the state administration for nearly four centuries of the Ottoman Empire, is preparing to host the masterpieces of the Kremlin Palace.The exhibition that is named “Kremlin Palace Treasures are in the Topkapı Palace” is inviting all residents of Istanbul tobe witnesses of the great meeting of the two palaces. 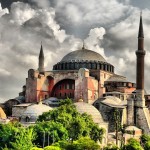