Hodjapasha Dance Theatre is a restored 550 years old Turkish bath as Hodjapasha Hamam. It was built by Hodja Sinan Pasha who was a teacher and later vizier to Fatih Sultan Mehmet during 1470’s. It was a double bath for both man and women. It is comparatively a big bath with high dome, made of cut Stone and also comer walks are designed like a peacock tail. This building served as a Turkish Bath till 1988.

Rhythim of the Dance is featuring variety of charming folkloric dances of Anatolia,Balkan and Caucassian regions combined with exotic orientasl dances with modern choreography in collages,including Group orsolo male and female belly dancers. Highly energic and moving,amazing costumes, 360 degree video projection effects are used during the sho. Show is performed by 20 dancers.

White Rose is a theatral dance show that sensationally combines harem dance, priental dance and modern dance together while exposing daily Ottoman harem life in Topkapi Palace. Theme is based on an extraordinary true love story experienced between an Ottoman slave woman and the Dutch ambassador during Tulip period in 18th century. Awesome costumes and 360 degree video mapping projection will make you feel that you are living in history. The play is performed by 25 dancers including male and female belly dancers.

The Mevlevi Sema ceremony is known for its whirling dances and dervishes,featuring a complex musical repertoire called Ayin. The sema Ceremony represents the mystical journey of man’s spritual ascent through mind and love to perfection. It is one of the most important richness of Turkish Culture as a tradition of 800 years. This unique tradition is proclaimed as Intangible Heritage of Humanity by UNESCO in 2005. 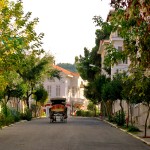